Should You Use Mouthwash Regularly? 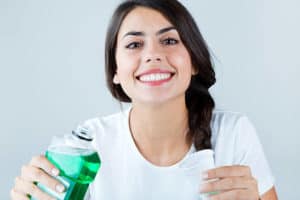 Minty, refreshing, and cleansing – these are some of the ways you may describe how your mouth feels after rinsing it with mouthwash. But is it possible to have too much of a good thing? While mouthwash can help reduce the number of bacteria in your mouth, should you use mouthwash regularly? Let’s turn to your dentist in El Paso to find out.

The Purpose of Mouthwash

Mouthwash is meant to be used in addition to brushing and flossing, and it’s not a replacement for these habits. There are several different types of mouthwash that can be used to help with anything from simply freshening breath fresh to actually reducing the risk of dental problems such as decay. Mouthwash can either be prescribed by your dentist in El Paso or purchased at any grocery store. In both options, mouthwash can either contain alcohol or not.

Which Type of Mouthwash is Best?

There may be pros and cons to choosing a mouthwash that contains or doesn’t contain alcohol. While the brands that contain alcohol can appear to work better because of the burning sensation that often goes hand-in-hand with alcohol, that’s not necessarily true. Alcohol is typically an inactive ingredient, meaning it’s not necessary to still reap the benefits of the product. As with most medical and dental products, the best choice for you depends on your needs and what you prefer.

If you take great care of your teeth by brushing and flossing daily, you may not necessarily need to use a mouthwash. However, some patients prefer the extra-clean feeling that comes along with mouthwash use. Additionally, there are some patients who can benefit more from mouthwash than others. For example, if you have tooth sensitivity or chronic dry mouth, you may find mouthwash a crucial part of your oral hygiene routine. Ask your dentist in El Paso whether or not you should use a mouthwash and which one is best for you, and make sure to choose a product with the ADA Seal of Acceptance.

How Often Should You Use Mouthwash?

There can be some debate about when and how often you should use mouthwash. The truth is, it depends on your specific needs as well as your chosen product. Most, but not all, mouthwash should be used on clean teeth after flossing and brushing. As far as how often you should use it, we recommend following both the guidelines on the label as well as the advice of your dentist. While side effects of mouthwash are rare, they can happen. Some of the most common side effects include:

If you notice any of these signs of irritation, stop use and contact your dentist.

When it comes to the question of whether or not you should use mouthwash regularly, the answer is it’s typically safe to use mouthwash up to twice a day or as recommended by your dentist.

What Patients Are Saying

He was excellent and pulled my wisdom tooth in less than 2 min. w/o chipping it. The service was good too.

Great dentist experience! While they do take my insurance, unfortunately, they are not part of my network, however, I liked them so much I will continue to see them.

We were very impressed with the helpful and friendly staff at this dental office.

I was very impressed and thankful with the service provided.

I’m 60 years old and I hated to go to the dentist, and put off going for a long time. But let me tell you Dr. Rizk is the best dentist I’ve ever had. I would of gone years ago. A no pain Dr. – thank you!

What Are Some Signs of a Cavity?

Cavities are not only common in kids, but they can also affect adults in large numbers. In fact, according to the  CDC, 90% of adults over 20 have had a cavity in their lifetime. Additionally, one out of every four adults between the age of 20 and 64 currently have... Read More...

How Can I Change the Way My Teeth Look?

Your smile is one of the first things people notice about you. In fact, according to the American Academy of Cosmetic Dentistry, more than 99% of adults see a smile as an important social asset, and more than 70% believe that an unattractive smile can have negative effects on someone’s... Read More...