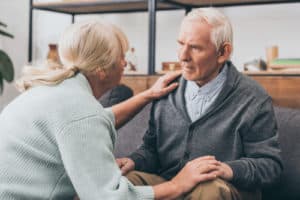 National Alzheimer’s Disease Month is recognized every November, and this year is no different. More than 5 million Americans are living with this form of dementia and there’s not much known about what causes it or how to prevent it. But your dentist in El Paso does want to share some good news that was recently released by the National Institute on Aging that may change how we prevent and treat Alzheimer’s.

An article published earlier this year by the National Institute on Aging shows promising research regarding a potential cause of this debilitating disease. The culprit at the center of the study? Gum disease.

Gum disease is an infection of the gum tissues caused by a buildup of bacteria. Poor oral hygiene, tobacco use, and some medications are just a few of the things that increase someone’s risk of developing gum disease. Gum disease can lead to tooth loss, bad breath, and whole-body issues such as heart disease and now, as suggested by recent research, Alzheimer’s.

The research from the National Institute on Aging takes a closer look at how gum disease can cause Alzheimer’s. In short, it has to do with a type of bacteria that can cause gum disease. Our mouths are home to hundreds of different types of bacteria, but the one that concerns dentists and researchers alike is one known as Porphyromonas gingivalis. In the study, this form of bacteria was the most common cause of gum disease. Additionally, one of the major staples found in Alzheimer’s patients called plaque of beta-amyloid protein may be produced as a byproduct of gum disease caused by Porphyromonas gingivalis bacteria.

In another study from the Journal of Alzheimer’s Disease, brain tissue samples were taken from patients with dementia and from those without dementia. What researchers found was that the dementia patient tissue contained gum disease bacteria whereas the non-dementia tissue did not.

But how do bacteria in the gums end up in the brain? Well, infections can easily enter the bloodstream and be carried to other areas of the body, including the brain. This is also how gum disease can contribute to heart disease.

The best way to prevent gum disease, and therefore perhaps Alzheimer’s, is to have good oral hygiene habits. Make sure you brush your teeth twice a day, gently scrub your tongue, and floss in between every tooth daily to further remove dangerous bacteria. It’s also important that you see your dentist in El Paso at least every six months.

While additional research is needed in order to further understand the potential connection between gum disease and Alzheimer’s, researchers are on the right track. Besides, brushing your teeth and seeing your dentist in El Paso can only benefit you, even if it may not completely prevent Alzheimer’s.

What Patients Are Saying

He was excellent and pulled my wisdom tooth in less than 2 min. w/o chipping it. The service was good too.

Great dentist experience! While they do take my insurance, unfortunately, they are not part of my network, however, I liked them so much I will continue to see them.

We were very impressed with the helpful and friendly staff at this dental office.

I was very impressed and thankful with the service provided.

I’m 60 years old and I hated to go to the dentist, and put off going for a long time. But let me tell you Dr. Rizk is the best dentist I’ve ever had. I would of gone years ago. A no pain Dr. – thank you!

If you’re missing one or even several teeth, you may be considering dental implants from your dentist in El Paso. After all, dental implants are an excellent way to replace your natural tooth as well as the tooth root. They’re permanent, secure, and can transform your life. But just how... Read More...

Now that we have your attention, the truth is, we don’t really have a big dental secret. But we do have some interesting news. Researchers have compiled evidence that supports the idea that good dental health can help slow down the aging process, and who doesn’t want to stay younger... Read More...